Using Git tags to manage the version of Xcode projects

Inspired by a recent post of Joachim Bondo I decided to rework my versioning scheme for Xcode projects as well. One of the major drawbacks of traditional versioning is that the so-called marketing version (Apple slang) is kept twice, once in the project's Info.plist file and once in the Git tag that is created after release. This redundancy is not only inconvenient, but can also lead to mistakes, i.e. forgetting to bump the CFBundleShortVersionString prior to tagging the new release.

So instead of maintaining the CFBundleShortVersionString we will now automatically inject the version number from the most recent Git tag into the generated app bundle. This is actually pretty easy and requires just the following two lines of shell code in a custom Build Phase:

To add it to a target in your Xcode project, select the target, then Add Build Phase → Add Run Script, set the shell to /bin/bash and paste the contents of the script above. Make sure it is run after the Target Dependencies phase and before the Copy Bundle Resources phase, as shown in the following screenshot. 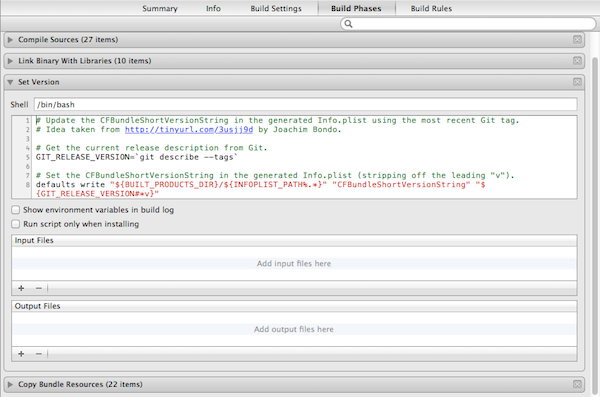 A nice side effect of using git describe --tags is that if you make a development build, in-between any Git tagging, you will get a version number like v1.0.0-12-gf181880. In this case the version was built from a commit identified by the (partial) SHA gf181880 which is 12 commits after the last tagged version v1.0.0. A great way to handle the marking version of development builds.