Now that we have working versions of our new native OCaml toplevel ocamlnat without toolchain dependencies for both i386 and amd64, I decided to run a few benchmarks, comparing our ocamlnat to OCaml 3.12.1 (both the byte code toplevel and the ocamlnat that silently ships with 3.12.1) and to our byte-code just-in-time compiler OCamlJIT2.

The benchmarks used are test programs from the testsuite/tests folder of the OCaml 3.12.1 distribution. They do more or less represent typical OCaml applications. The almabench, fft and nucleic programs are floating point benchmarks, quicksort and sorts are sorting algorithms, and the remaining are miscellaneous benchmarks. The programs were run on different platforms, measuring the combined user + system time for the process itself and all its child processes (only relevant for the old ocamlnat which invokes toolchain programs).

Below is the resulting speedup of the different toplevels compared to the ocaml byte code toplevel, with OCamlNat/ext being the old ocamlnat with the toolchain dependencies that ships with OCaml 3.12.1 and OCamlNat/jit being our new implementation available from the ocamlnat-jit branch of my ocaml-experimental repository. 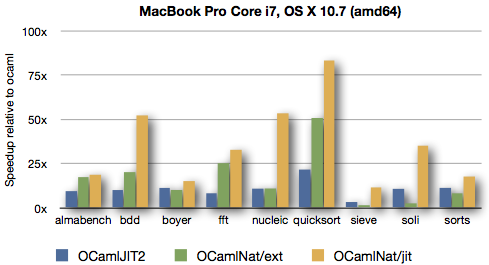 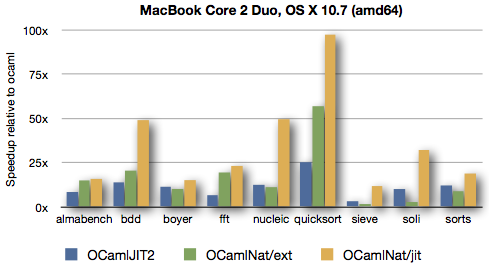 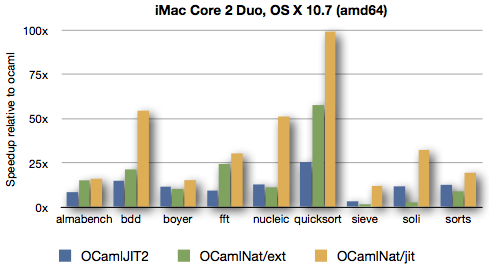 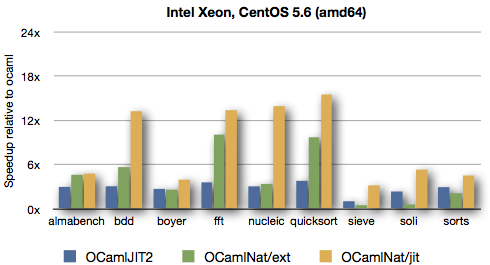 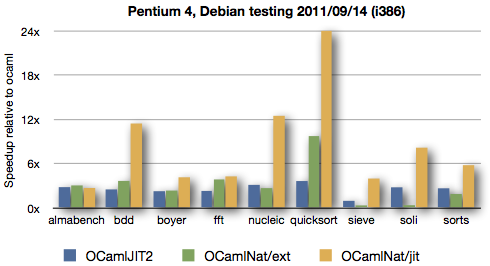 As you can see, the speedup is quite impressive with our native toplevel being up to 100 times faster than the byte code toplevel. It is however worth noting that this is in part due to the fact that llvm-gcc is now the default with OS X, which disables the register assignment optimization in the byte code interpreter.

If you want to try our new toplevel (and/or help with testing), you can always grab the latest source from my ocaml-experimental repository using the following command

and build and install it using

similar to the regular OCaml distribution. This will install a fully functional OCaml 3.12.1 system to /path/to/ocamlnat-jit together with a new binary ocamlnat, our native toplevel. You should be able to use ocamlnat as a drop-in replacement for ocaml in almost every case, unless you really need the byte code runtime (i.e. Coq is one popular application that heavily depends on the byte code runtime).